How do you feel about this person?

My father and the forsythia 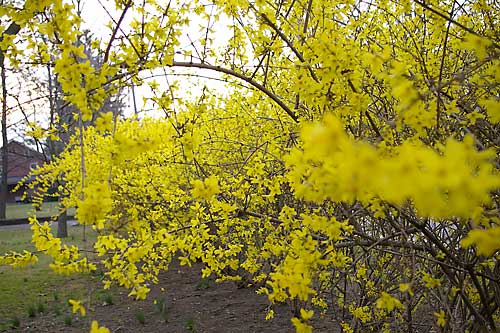 This time of year my forsythia bloom. I look forward to seeing this extraordinarily cheerful burst of yellow in the spring. It makes me feel good every time I see it.

I planted the forsythia years ago when they were just  2 to 3 feet high. There are twenty-eight of them. It took a lot of effort to plant them. It was six weeks before I got them all in. I'd plant four every time I worked at it and then I'd be in physical pain. I'd wait till my joints and muscles recovered and plant another four. I didn't want anyone to help me plant them. It took me from May to July that year. Now they are big and gorgeous in the spring. It was worth it.

Every spring when they bloom, they remind me of my father. Paul had some very bad habits. Habits that are illnesses. He was addicted to gambling and also to alcohol. This affected his personality and affected his relationships. But the forsythia are not about his bad habits. They are a memorial to what I remember about my father that was good.

Paul was a good gardener. His stepfather was also a good gardener. Some of my memories from when was a kid include the vegetable garden of my stepgrandfather. The smell of tomato plants. The willows hanging over the nearby brook. The small black beetles that hung out on the leaves of the willows. Perhaps my father's stepfather taught him how to garden. It is such a peaceful pursuit for a man who otherwise had such unpeaceful bad habits. Maybe my father gardened too because he considered himself to be a thrifty man and maybe he thought he was saving money by growing his vegetables. It doesn't matter why he gardened. It's just a pleasant memory of my father.

In the yard of the house where I grew up there was room for his garden and also there were flowers. Whomever had owned the house prior to my parents had planted flowers. There were roses and hollyhocks and lily of the valley and tulips and rose of sharon and forsythia. Every year my father would cut the forsythia way back. Every spring the forsythia would spring forth with a triumphant burst of yellow on an explosion of new branches. Every year. I looked forward to seeing the forsythia bloom after being trimmed down the previous year to a fragment of its size.

I know how ill my father was. It was a lifelong illness which he never tried to fight. But I know that he wasn't a bad person. He had a good side that people were fortunate enough to meet on occasion. The forsythia remind me of my father's good side and his good habits like gardening. Every year the forsythia bloom and I remember my father.

The forsythia are blooming now as I type this. I am so very happy to have those forsythia. To write about them and my father makes me weep. Sometimes I need to weep, for what was lost, for what never was, and for what was. But I only cry when I am telling someone else about what the forsythia mean to me. Seeing them in bloom never makes me cry. They gladden my heart.