An Introduction to Estrangements 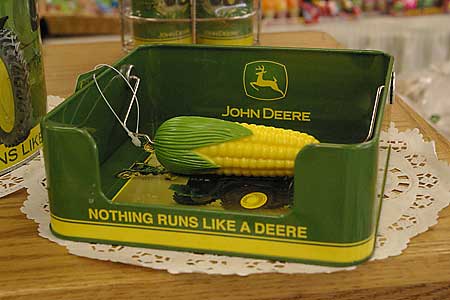 When I was in the big candy and nut store yesterday, they had a fantastic display of John Deere stuff as ideas for Father's Day presents.

For kids whose dads are farmers, this must seem absolutely normal. The saleswoman in the store asked me if I was from around here. She thought I was a tourist because I was taking pictures. (I get that kind of question when I take pictures of corn too.)

No, not a tourist.  I've lived here for 23 years but I had never seen a display of John Deere things in the candy store before. Maybe they have them every year and I hadn't noticed. I thought they were great fun. Especially the John Deere napkin holder. That's the one in the top picture with the big ear of corn to hold down the napkins. What every John Deere owning dad should have! 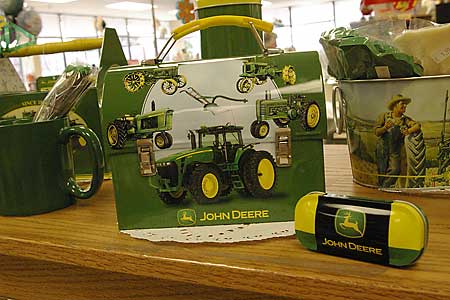 There was a John Deere lunch box and a John Deere decorated pail with goodies inside as well as other wonderful John Deere stuff like salt and pepper shakers and tins and carriers. The goodies included little chocolate tractor lollipops. The gas tank on the left is a bank.

This is all kind of wonderful! What lucky lucky dads! Although I suspect that when the dads finish with the goodies inside, the kids get to keep the packaging!

This segment in the life of an Ordinary Woman is brought to you by:
Ginny