New research challenges the deeply held notion
that family relationships can’t be dissolved and
suggests that estrangement is not all that uncommon.
Article by Catherine St. Louis, Dec. 20, 2017

As of mid-day May 6, there are 768 comments in response to this article.

What can you change?

1. Man starves himself to death in treehouse
By Harry de Quetteville in Berlin. February 26, 2008
Quote from article: "By his body was a chronicle of the 24 days he spent there before he died, in which he wrote of his pain at the break-up of his marriage, his estrangement from his daughter and his long-term unemployment."
2. Charlie Otero: Life After Death, Feb 21, 2008
Quote from article: "This coming Monday, February 25 marks the 3rd anniversary of the arrest of Dennis Rader, the BTK serial killer. But it also marks a new beginning for one of those most affected by BTK's crimes.
Charlie Otero will spend the anniversary night watching a documentary about what he and others went through."
3. New Zealand: Woman buried after body-snatching drama, March 7, 2008
Quote from article: "A 76-year-old New Zealand woman was buried on Friday after a drama in which her body was snatched from a hearse by estranged family members who wanted her interred elsewhere, news reports said."
4. The Expositor: Search for blood ties not always happy for one-time residents of maternity home. Posted By Lois Legge
5. Farm Families Challenged to Deal with Emotional Side of Farm Transfers, Fri, 02/29/2008. Charlene M. Shupp Espenshade, Special Sections Editor, Lancaster Farming.
6. Blood Ties, February 29, 2008 Nigel Nicholson is professor of organisational behaviour at LBS. His latest book, Family Wars: Classic conflicts in family business and how to deal with them, written with Grant Gordon, is published this month by Kogan Page. Quote by Nigel Nicholson in Blood Ties: "For our book Family Wars, I and Grant Gordon (director general of the UK's Institute for Family Business) analysed 24 case histories worldwide, looking at some of the highest-profile family conflicts of recent times. We wanted to see what common themes they exhibited, and what lessons might be learned.
They are an enthralling mix. There are awesome melodramas of skulduggery, double-cross, relentless vengeance and, in one case (the Gucci saga), even a hitman. Then there are more mundane but equally depressing stories - where families lock themselves into positions of increasing entrenchment."
7. Group helps heal wounds of child estrangement, March 5, 2008
Quote from article: "H.E.R. promises no happily-ever-after outcomes. Ms. Gray has accepted that she may never have a relationship with her daughter. But she said the support group helps her be a better mother to a younger adult daughter."

The Pitfalls of Online Communication

This is a link to a New York Times article on the pitfalls of online communication through email. (There is some chance you might have to register with the NY Times to read it. But if you do, registration is free and the NY Times has a lot of cool stuff to read!)

The Pitfalls of Online Communication

My original title for this snippet, "Mummies in the news!", made me squeamish but I went ahead and used it anyway. For those who are connected in real life to this sort of story, it must be anything but funny. It's the sort of story that is funny if it is fiction and on Monty Python. But not so funny if it is you or your mother  who ends up mummified on a couch for years and the subject of international news.

Reminds me of what happened with Laura Schlessinger's mum: On Smoking Gun

And then there was the mother at the Bates Motel in Psycho.

How isolated some people become! Not to be noticed as not among the living for months or years? Sitting mummified on a couch for years? Years?

Ginny (who hopes that it is a comfortable couch if I have to sit there for years!)
With apologies to those who find this wildly inappropriate

Pass the ketchup but no thanks on the testosterone!

I love Scott Adams. There I said it. I love the guy. Today he posted a link to a study about the reactions of some people to angry faces.
High-testosterone people reinforced by other's anger new study finds, March 14, 2007 - on the University of Michigan website.
Which reminds me instantly of one of my mother's brothers and his love of teasing. And my mother's warped sense of humor where she excuses outrageous behavior in the name of joking. Until now I never would have thought of her as having high testosterone. Otherwise she was a wuss.
Scott Adams talks about the implications of this study in this post: This Explains Everything.
Now I am going to go and build a thatch hut for Scott Adams.

Ginny (who, until now, never realized that she had escaped the family testosterone curse.)

The Deer in the Headlights of the Oncoming Media 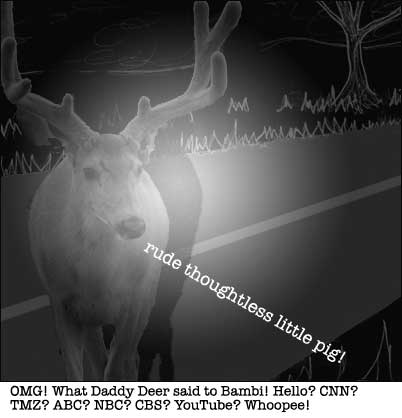 I didn't see the Paula Zahn segment about Parental Alienation Syndrome on  CNN  on June 19 but saw a segment from the show on CNN this morning. I found a transcript from the show on the CNN site. To read the section on PAS you need to scroll way down almost to the bottom. 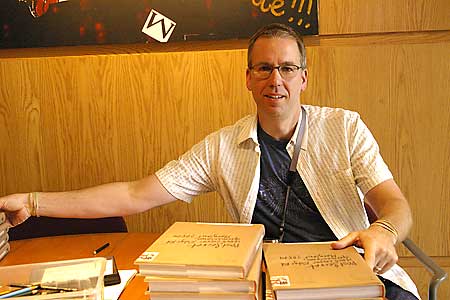 I had the great pleasure of meeting and photographing Frank Warren of Postsecret when he came to the Reading Public Museum in Reading, PA on Saturday, June 17, for the opening day of an exhibit of a selection of the Postsecret postcards. The exhibit will run until October 8 and he will be back at the museum in the fall for a book signing.

I was fascinated by seeing the actual postcards. The real life sizes and the handmade nature. Being able to see both sides of some. The creativity in deciding how to express each secret. A few of the secrets made me shudder.

The exhibit was mentioned briefly on the Postsecret website. I don't know why it isn't mentioned there now but it is mentioned on the Reading Public Museum site. So if you're in Pennsylvania in the vicinity of Reading, you might want to visit. The other exhibits where the postcards have been shown were in the Alexandria, Virginia area.

May 15: Estrangement in the News

"One of the things we've always tried to do is give families back a body," Harvey said, adding that some bodies have been at the morgue for nine months. "But when we're looking for families, we find that today we're not always dealing with the Ozzie-and-Harriet close-knit families. Families are often estranged."

Roseanne was reconciled with her family in 2004.
On imdb.com: Biography of Roseanne
On VanityFair.com, multiple page article: God and Man in Beverly Hills by Evgenia Peretz

Quote from page 2 of the Vanity Fair article:

After a few years of hard work with Yardeni, Barr became kind of … decent. "All my relationships and everything were pretty well damaged by my bad behavior," says Barr. "I was able to turn around and heal because of the fact that I could find a quiet space inside my mind and get rid of my fear and feel love… . I had an estranged family—we didn't speak for 15 years. Now I have a wonderful relationship with my mother and my siblings and with my children and with everyone that I have relationships with. I don't get high off getting angry anymore."

May 2: Estrangements in the News

More Estrangements in the News, April 2006

Estrangements in the News, April 2006

Months ago I read about this young guy in England who decided to earn tuition money by selling pixels on his home page. It's just a wonderful story of marketing and technology and money and ... It's just amazing. If you've never heard of it, it is such a neat story. So here is the link for his home page: Million Dollar Home Page

The page will take a while to load in unless you have a fast connection. But be sure to visit his blog that is linked at the top of the page. It will tell the whole story.

Yes. I know. This has nothing to do with estrangement.

Estrangements in the News

Dear Annie. Sunherald.com Scroll down in the page accessed from this link to a cautionary tale on false memories and inaccurate perceptions.

Woman threw herself between child and attacker. Vancouver Sun, February 1, 2006 Story of people in Canada given awards for heroism including that of a woman who heroically saved a 5 year old child from a violent attack by the child's estranged mother. Monique Wong, the heroine, is a citizen of China and, ironically is being asked to leave Canada by Immigration as she is not a citizen.

Estrangements in the News

Two stories in the news: one tragic, one delightful

Five Found Dead in Related Shootings, October 26, 2005
I'm wondering what the rest of the story will be. This may be one of those cases where a quiet estrangement would have been preferable.
Note added later: Here's another link with more info: Va. Man Who Killed 4 Had Mental Problems from ABC News

But on a different note, a happy story that isn't brand new but is new to me as a dear online friend shared it with me today. This story had its beginnings around Christmastime in 2004:
A Hippo and Tortoise Tale by Jennifer Ludden

63-year-old bank robber raised his sons right. So they turned him in. By Ted Gregory, Tribune staff reporter. Published November 18, 2005

One more of those stories that fascinate me. The kind where the downright upright solid citizen has a secret side that almost no one knows about and one day his sons wake up and discover that their father is a philandering crack smoking bank robber! At least two of them stop talking to him ... after they turn him in.